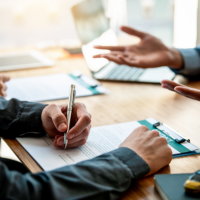 June’s job out of college was with a distribution company selling small widgets.  After a few years, thinking that there was more money in large widgets, June approached a large widget manufacturing company to represent their products in her market area.

Twenty-five years later, with the business thriving, June started to receive inquiries regarding her interest in selling the business or selling part of the business.  She had discussions with prospective buyers, investors, and with colleagues who had sold their businesses.  The common theme of the sellers was regret.  Regret about selling too soon.  Regret about the changes to the company.  Regret about how the employees were treated.

The Employee Stock Ownership Plan (“ESOP”) was designed to allow business owners to sell stock indirectly to their employees by using a trust.  The initial ESOP occurred in 1956 in which the Profit-Sharing Plan of Peninsula Newspaper in San Francisco received a private letter ruling allowing it to acquire the Company’s stock from Company shareholders.  ESOPs are now part of ERISA and provide tax benefits for sellers in some cases and for the Company owned by the ESOP.

June learned about ESOPs from her financial planner.  After consulting with the financial planner and her CPA, she decided to sell one-third of her stock to an ESOP.  Because the corporation was a “C-Corp,” she was able to defer taxes on the gain on the sale to the ESOP.

June investigated the sale of 100% of the company to the ESOP with her team of a financial planner and CPA and an investment banker that specializes in ESOP transactions.  However, June decided to sell a minority interest and continue to grow the business.  Key managers have stepped up and assumed more responsibility.  The Company’s productivity has improved, and the annual value has been increasing.

June is now considering a second transaction to increase the ownership of the ESOP.  She has complete flexibility as to the number of shares she wishes to sell.  This transaction could be 100% of her remaining shares, which would make the ESOP own 100%.  Or it could be a smaller number of shares so that she could remain in control.  Or she could transfer control to the ESOP.

June has recently received calls from colleagues seeking an exit to learn about her ESOP experience.  She answers that she is selling the business to people she likes and has no regret of her decision.