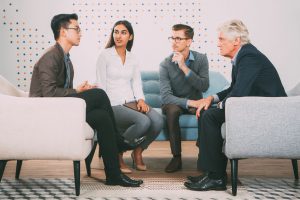 Advice from an experienced Silver Fox Advisor concerning what not to do is as valuable as guidance and suggestions on what should be done!!

Four people who knew each other well (a saleswoman, a commercial artist, a copywriter, and a physical fitness instructor) shared a common interest in their own physical fitness. They wanted to capitalize on the current trend toward health and fitness by building and operating a facility to function as a Ropes Course. They were located in a large city with many companies and people as prospective customers. A very favorable location was available but satisfactory terms were not yet worked out. All were to be equal partners. Adequate capital was available from outside investors. A general division of responsibility for operating functions was agreed to between the four potential Owners.

The challenge was to initiate a business plan and begin operations as quickly as practicable.

As planning and negotiations for location and equipment continued, two Silver Fox Advisors were called in. Although there was much discussion, no practical or complete business plan ever came together. It soon became apparent that none of the individuals, other than the fitness instructor, was planning to quit their other job to devote full time to this venture. And to him, it was just another job, not an entrepreneurial opportunity.

The Silver Fox Advisors were able to convince the four potential Owners of the new Start-up Company that, on the basis of their overall commitment, the operation would never succeed. Although much time was spent in arriving at this conclusion, very little of the potential Owners’ money was spent, and no investor money was accepted or wasted. A business disaster was avoided!