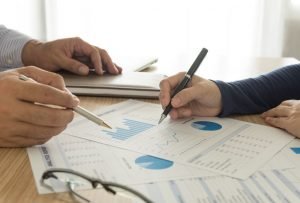 Two partners (“Owners”) of a small Houston Company, with $2.0 Million of annual sales and well respected in their trade, found themselves with a severe Internal Revenue Service Problem.

Company sales had been stable for several years while overhead continued to grow. Benefits for employees were consistently increased even though margins were narrowing and other overhead costs were increasing. The Owners drew out almost all remaining earnings for their personal salaries. Rising costs and some economic downturn aggravated the cash flow problem and the equity portion of the balance sheet was negative.

Serious problems occurred when the Owners decided to defer the deposit of employee withholding tax for several quarters. The IRS promptly advised them that it was not the Company’s money and that the IRS wanted it now (plus interest and penalties).The payroll tax problem was some $125,000 and growing substantially.

The Owners decided to seek help and called on their local bank for expansion of their line of credit. Due to earnings history, minimal capital, lack of collateral cushion & the IRS problem, the bank was not willing to help. They visited a second bank, then another, and another. Each time, they went away “empty-handed.” The bankers proclaimed their commitment to the local business; however, none was willing to make a loan. The cause seemed hopeless.

Then, someone advised the Owners to call the Silver Fox Advisors to assist them in resolving the financial dilemma. All too often, small companies “knock” themselves out trying to get bank financing. Bankers play it by the book, and even healthy and promising companies can fail to measure up to a bank’s financial tests, such as a strong debt-to-worth ratio. The point is – If you don’t have the numbers, you don’t get the money!

Not having the “numbers” is precisely the predicament the Owners faced. Because most of the Company’s assets were encumbered by existing loans, the business was not financially attractive on paper. However, this situation belied the fact that it was a first-class facility with a strong clientele in a growing and affluent economic environment.

The objective was to translate the Company’s strength and potential into current financing. The Silver Fox Advisors are skilled at matching cash-starved companies with the appropriate loan sources and they can “tap” a network of financial institutions willing to fund small businesses.

The first priority was to get “breathing room” from the IRS pressure. A second Silver Fox Advisor, with extended experience in dealing with the IRS, was brought in. The Silver Fox Advisor was able to convince the IRS to accept a new payment plan, buying some time for outside resolution.

The Factoring Company approved a $400,000 line of credit that provided enough availability for the Company to pay off the IRS. Bank debt was restructured and a four party (Bank, IRS, Factoring Company and Company) understanding was reached. It should be noted that factoring is a very expensive way to fund a small operation but may be required in certain circumstances.

In Summary, the Silver Fox Advisor:

The Company was able to get out of its financial predicament, prosper and move out of the Factoring Company arrangement with its related expensive costs and paperwork.