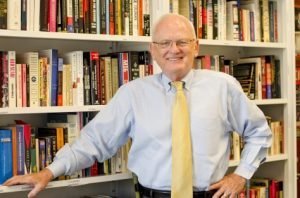 Mr. Olson will take the audience into the world of espionage as he lived it during his 31-year under cover career. The theme of his presentation will be “Traitors I Have Known,” a discussion of his personal experiences with American spies who betrayed our country for money, ego, or sex. He will describe why these traitors did what they did, how they operated, and how they got caught. Mr. Olson will leave time at the end for questions about his career, the CIA in general, current events, or anything else on the audience’s mind. He will also provide an overview of his new book, “To Catch a Spy: The Art of Counterintelligence.”

When the Soviet Union dissolved in December of 1991 many academics, media commentators, and even senior government officials declared that the Cold War was over and that we were in a new era of Pax Americana. Jim Olson was not one of those who was deluded by the changing currents of international affairs.

Professor Olson in his new book, “To Catch a Spy: The Art of Counterintelligence”, demonstrates the devastating success of hostile Intelligence services against all elements of the U.S. government. He has also shown the evolution of U.S. counterintelligence activities and the positive nature of these changes while acknowledging the difficulties of effective counterintelligence in democratic societies.

“This program promises to be an interesting dive into a world few of us know anything about. It will be informative and entertaining. Mr. Olson has previously presented at one of our events and the audience response was very positive.” says Bill Herman, President, Silver Fox Advisors.

Mr. Olson is our featured speaker on July 23 as part of the monthly Silver Fox Advisors Lunch & Learn. The program will be in webinar format. Please register in advance.

Register for the Webinar