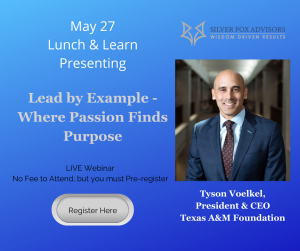 The Silver Fox Advisors announce their guest speaker for the May 27th Lunch and Learn Webinar. This month we are honored to have Mr. Tyson Voelkel, President and CEO of the Texas A&M Foundation.

A 1996 graduate of Texas A&M University, Tyson Voelkel has served as president and CEO of the Texas A&M Foundation since 2016. In his role, he provides direction for the management of the Foundation’s $2 billion in net assets, serves as principal liaison with the university, and leads university-wide fundraising activities. He also successfully oversaw the Lead by Example campaign, the largest higher education fundraising effort in Texas history, which exceeded its goal to raise $4 billion for Texas A&M students, faculty, colleges and programs within a nine-year period.

Born and raised in Brenham, Texas, Tyson holds an undergraduate degree in industrial distribution from Texas A&M, a master’s degree in international relations and national security from the Bush School of Government and Public Service, and an MBA from Rice University.

Prior to working at the Foundation, Tyson led a Houston-based consultancy focused on building, managing and advising ultra-high net worth family offices. A U.S. Army Infantry Officer for more than 12 years, he twice served as a Company Commander in the 82nd Airborne Division in combat operations in Iraq, earning two Bronze Stars. He also taught leadership and ethics at the United States Military Academy at West Point. Today, Tyson still serves as Lieutenant Colonel in the U.S. Army Reserve.