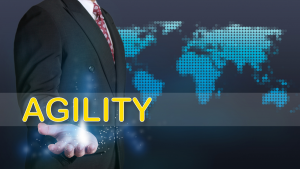 It is undeniable that change is accelerating and becoming more chaotic.  Leaders need to understand this change.  What is driving the change?  What are the implications on your leadership?

Technology is driving the change. I have put together a model to help you understand this change and high-level implications on your leadership. After exploring the model, we will highlight key thoughts on leadership agility to deal with this rapid and chaotic change in today’s business world.

We are all familiar with the industrial revolution starting back in the mid-1700s.  New technology in the form of machines changed the manufacturing process of goods.  Machines substituted for human labor.

It brought about new forms of business enterprise because this change was mass production.  Organizations had to evolve to deal with the larger volume of transactions.

It was a new world.

Back in the 1960s when I was taking organizational behavior courses the buzz word was “management by exception.”  You probably heard of “If it ain’t broke, don’t fix it.”

The assembly line was key to production.  You had to keep it going.

Change was not rampant.

Therefore, the focus was on control.

To lead these massive organizations with their hierarchies, the management style was traditionally autocratic.

The technology of automation from the Industrial Revolution paved the wave for a transformation change in information processes with the advent of computers.  Software programs did the work of repetitive clerical type roles and more.

I joined Shell Oil in 1970 as one of those programmers to create this new software.

The new buzz word was “Change is the Constant.”

The rigidity of large bureaucratic organizations was being significantly impacted by the delayering and restructuring brought on by this information processing revolution.

More decisions had to be made to cope with the constant change.

It made sense to have others participate in the decision-making process.

Companies needed to keep up and not get lost in the change from their competitors.

The focus turned to adaption.

Second Wave of the Information Revolution

By 1965, an M.I.T. scientist developed a way of sending information from one computer to another that he called “packet switching.”

This has continued to evolve into today’s multi-faceted internet world.

It is not just social media.

You can type anything into your browser and get a voluminous amount of information in seconds.

This has been a big driver of the acceleration of change which creates instability.

The hybrid DNA-RNA was created around 1960 as part of the early beginnings of the Biotechnology Revolution.

At the turn of the century, the world had advanced to the sequencing of the human genome.

On a similar front, the theory of manipulating atoms was around 1960.

Some twenty years later, the scanning tunneling microscope was developed that could see individual atoms.

Together this has all led to the manipulation of cells and atoms.

Today, this Molecular Revolution has come to the forefront.

It is transforming the very fundamentals of living systems and materials.

In short, the molecular revolution is another key driver underpinning the chaos.

The ability to fundamentally reprogram things is opening people’s minds not constrained by traditional boundaries.

Management styles are shifting to visionaries.

Instead of being whipsawed by accelerating and chaotic change, visionaries are creating the future.

Ramifications on your Leadership Style

There are practical ramifications of today’s changing dynamics for every leader.

Those in fast cycle industries have been in this chaos for some time.

Slow cycle industries have sped up.

Life spans for companies have shortened.

Technology and imaginative minds are driving more technology and transformations that lead to even faster change and more chaos.

Leaders must be more agile and flexible to cope and prosper, but how do you do that?

What competencies and skills are needed to be an agile leader?

There has been some very thoughtful research on this question.  In this blog, I can only give you highlights and direct you to some of the better resources (in my opinion).

Using the compass, they then take you through their five levels of agility development: Expert, Achiever, Catalyst, Co-creator, and Synergist.

It has a lot of content. If you are really trying to enhance your leadership agility, it is worth a read.

Korn Ferry has also done a lot of research on leadership agility outlined in their paper on The Organizational X Factor: Learning Agility.

They describe learning agility as made up of five factors: Self Awareness, Mental Agility, People Agility, Change Agility, and Results Agility.

You can see some similar ideas to Joiner and Josephs’ Leadership Compass.

I like their addition of Results Agility described as delivering results in first time situations.

The authors, Mary Knight and Natalie Wong, contend that Learning Agility is a top predictor of high potential people. Companies with highly agile executives have 25% higher profit margins than their peers.

It is also important to have a perspective in thinking about the context of this change in your day-to-day world.

What is central to how the world should work for you to what are the dramatic implications of changing technologies?

In this respect, Lee, Hecht, and Harrison, a global leader in talent development, wrote an interesting paper on Core, Edge, and Agility.

My Silver Fox Advisor colleague, Doug Thorpe, has condensed their ideas and his own in an article on his website in 2018 entitled Leaders: There’s a New Way to Understand Change | Business Advisor, Mentor and Executive Coach | Doug Thorpe

It is certainly worth your read with the idea that agility helps manage the forces of what’s core and what is on the edge.

Agility has certainly become a popular topic for organizational consultants in this 21st century.

One concept I like from McKinsey’s March 2018 article of Leading with inner agility is “set direction not destination.”

This brings us back to my model introduced at the beginning of this blog on understanding change.

You not only have to have agility competencies, and a framework of thinking about agility as we have just discussed.

You also need to be the visionary highlighted in the model.

Ultimately, the management style of significance in this world of accelerating and chaotic change is a visionary leader.

Set directions with the agility to adjust destinations.

To paraphrase Jack Welch, control your own destiny or someone else will.