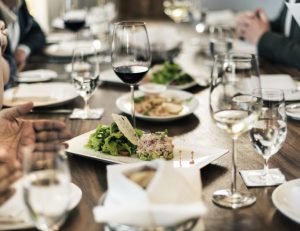 Retirement might have been feasible except for the fact that the Owner’s wife, 20 years younger than he, had just earned her PhD and was now ready to begin her own career, not in the restaurant business. The Silver Fox Advisor pointed out that the Owner could retire but if he wanted to stay married, he would not be able to travel very far with his new found freedom. She would be busy building her new business.

After several meetings, with a lot of analysis and study, the Owner agreed that restructuring management might be the answer.

Several months later a management structure along the following lines was implemented:

Join Us For Our Next Event!

The Lunch & Learn events are held in person on the fourth Thursday of each month beginning in January and run through and including October.
Location: Virtual