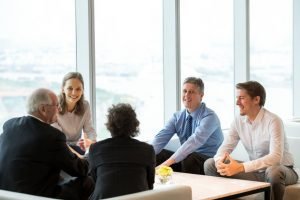 In a previous blog on September 15, 2020, we looked at my 3 P Leadership Framework: People, Planning, and Performance. This blog goes more in-depth on the People side.

I am asked by small business owners for the best current leadership books to read that are concise and insightful. That is a good question and I say something like John Maxwell’s LEADERSHIFT The Essential Changes Every Leader Must Embrace. Given the accelerating pace of change in today’s business world, Maxwell does offer real insight.

I believe modern leadership theory really began with Douglas Mc Gregor’s 1960 book entitled The Human Side of Enterprise in which he laid out two opposing theories on perceiving and motivating employees.

In simple terms, in Theory X the manager/leader believes employees have little desire for work other than the paycheck.  In Theory Y, people are internally motivated requiring less direction and control. In my opinion, these beliefs can become self-fulfilling prophecies and lead to different leadership styles.

With Theory X assumptions of People, leaders will tend to be autocratic telling people what to do with little discretion.  Those with Theory Y beliefs will tend to give employees more freedom and bring them into the decision-making process.

We talked about beliefs as part of Persuasion in my 4 Inner Ps of Leadership blog of October 30, 2020. Clearly this belief around people’s internal motivation is critical to a successful relationship with your employees.

The punch line is the Performance of the organizations went from Exploitative Authoritative being the worst improving up the scale with the Participative System being the best.  His book The Human Organization published in 1967 still sits in my library.

Also, in the 1960s, Blake and Mouton published their Managerial Grid or better said Leadership Grid with two key dimensions: Concern for People and Concern for Results (i.e. Performance).  So, there you have two of the 3 Ps.  A style that was low on both dimensions, called impoverished management brings disharmony, disorganization, and dissatisfaction.

Interestingly, taking a Middle of the Road approach ends up with only mediocre performance.  The best, which they described as the Team Management having a high concern for both People and Performance, has a leader with a Theory Y belief and participative style- no surprise.

As we discussed in the recent blog on the 4 Inner Ps of Leadership, leadership style as part of your Personality has a significant impact.  Know your style and how you are relating to your People.

We described in my earlier blog on the 3 Ps of Leadership the Zenger and Folkman’s leadership model of a tent.  Character was described as the pole that holds up the tent of the other four stakes: personal capability, focus on results, leading organizational change, and interpersonal relationships. It is the centerpiece.

As Warren Bennis, one of the great leadership thinkers once said, “real leaders, and people of strong character, generate and sustain trust.” There are many elements that build trust such as doing what you say you are going to do.

In other words, People can count on you. On the People side, showing respect and listening goes a long way. Lots more could be said on character and trust, but you can generally see it and feel it when observing someone’s behaviors and actions.

Back on the Inner 4 Ps of Leadership, Persuasions have a fundamental impact on your interpersonal relationships.  If you lack a strong moral compass, People will be extremely cautious on what you ask them to do and why. As highlighted in the blog, Personal Purpose can be a guidepost in building your character.

In my psychology class, we discussed Maslow’s hierarchy of needs, one of the most influential models for me in understanding People.  You probably have heard of his theory that there are five levels of needs beginning with physiological (i.e. surviving) followed by safety, love and belonging (social), esteem or ego, and self-actualization.

People move up this hierarchy and are motivated by the level they have reached.  If they are driven back down, they are demotivated.

Herzberg outlined this back in 1959 (in his Two Factor Theory of Motivation) as Hygiene factors such as pay, company policies, fringe benefits, physical working conditions, status, and interpersonal relations.

In these hygiene factors you can become dissatisfied, but they are not big motivators.  He saw motivational factors as recognition, sense of achievement, growth and promotional opportunity, responsibility, and meaningfulness of the work. Even sixty years later, Herzberg had a lot of insight into what needs motivate People.

Back to Maslow, in my opinion as a society here in the United States we have generally risen to the level of ego needs.  As some say, we are in the “me” generation.  People want a job experience tailored for them and their desires.  A hundred years ago they primarily just wanted a job. Some would argue that People driven by self-actualization are emerging.  They can provide powerful results if your offering fits their needs.

There are a couple dimensions of the 4 Inner Ps of Leadership that support understanding your Peoples’ needs.  In the former blog, we discussed under Persuasions the importance of understanding others’ perspectives that drive their behavior. Then your leadership skills come into play.

In Proficiencies, strengths in Rath and Conchie’s domains of Influencing and Relationship Building not only help you understand others needs but can help you in addressing them.  Ultimately, that will lead to value propositions.

In my book, Develop a Leadership Plan: Become a Great Leader I advocate that value propositions are needed for all your key stakeholders.  Of course, we all recognize the need for an impactful value proposition to attract customers.  The same can be said of your employees and leadership team. What do you offer that makes them want to work for you and your company?  How does that compare to your competition?

For an organization, I see value propositions as layered.  At the highest level, what is your value proposition for the whole organization?  This will include bigger picture ideas such as vision but also the values, empowerment, and other hygiene and motivational factors that People can expect.

Then, at the individual level, what is your value proposition for specific people? How do you get the best that People can provide, and the organization needs? These tailorings will generally fit into Herzberg’s motivational factors with recognition, sense of achievement, growth and promotional opportunity, and the meaningfulness of work.

Do not forget their participation in decision making and engaging in the direction and vision of the business.

Depending on the size of the organization, there may need to be mid-level value propositions.   These are specific offerings for different types of work groups.

Incidentally, John Maxwell does a great job talking about leaders adding value in his book on LEADERSHIFT.

Bottom line, as a small business owner/CEO you are the boss, but to become really successful you will need to become a leader.  Think about People first.  Think about what matters to them.  In Servant Leadership vernacular, how can you serve them first such that it makes them want to follow you on a common purpose.  In a future blog, we will provide some Reflections on Servant Leadership.